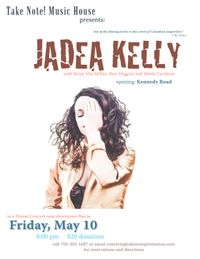 The Take Note! Music House welcomes the CFMA’s 2016 “Contemporary Singer of The Year”, Jadea Kelly, (opening act Kennedy Road) on Friday, May 10 at 8:00 pm (doors open at 7:30). Requested donation is $20, with all proceeds going directly to the artists. You may reserve your seat by emailing concerts@takenotepromotion.com or calling 705-305-1687 (email best, phone repair hasn’t happened yet) – address given upon reservation – downtown Barrie, near the courthouse.

“One of the shining jewels in the crown of Canadian songwriters. Her sound is pure Canadiana, that is, elements of prairie country, big city soul, and the sense to take just a little bit of both.” – Tom Power, CBC Radio

Originally from Whitby, ON, singer-songwriter Jadea Kelly now spends her time writing and living between Toronto and Los Angeles, CA. In 2016 she was awarded 'Contemporary Singer of the Year' at the Canadian Folk Music Awards for her heartfelt 2016 release 'Love & Lust'. Its featured single 'Beauty' was placed on the Lifetime Network feature 'No One Would Tell' and the 2017 CBC Rio Paralympics, an opening montage with over 900,000 views. Set for release on May 17, 2019, the MWI soundtrack EP has already received 'Best Score & Music' accolades from the Hollywood Independent Documentary Awards. MWI is the official soundtrack for 'Met While Incarcerated the Film', airing on the Documentary Channel and CBC March 31 2019.

“Comparisons have likened Jadea Kelly to the melodious dulcet tones of Iris Dement and this is a thoroughly appropriate compliment.” – Fatea Magazine, U.K.

Jadea Kelly has done multiple tours across North America and Europe. Her music guides the listener on a prolific journey towards light and surrender. Kelly’s most recent album, “Love and Lust” is “a record fully engrossed in the dark truths of infidelity, human frailty, and all of the darkest corners… Kelly reveals herself in ways we’ve not yet seen from the Toronto songwriter.” [Beatroute] compelling catalogue of desire, betrayal and human frailty. Jadea will be accompanied by guitarist Brian MacMillan, bass player Bret Higgins, and vocalist Sheila Carabine (of local favourite, Dala).

Kennedy Road is a Toronto-based Americana duo, comprised of Sheila Carabine and Brian MacMillan. He’s the tall one. Their seamless vocal blend and electric on-stage chemistry is perfectly matched by their intense and poignant songs. Sheila comes by collaboration honestly, having spent the last 16 years in the Juno-nominated folk duo Dala. Brian is a much beloved singer-songwriter and multi-insrumentalist, who has released three solo albums. He has performed with Barenaked Ladies, Wailin’ Jennys, Garth Hudson, John McDermott and Lowest Of The Low. Like their namesake North South street, Kennedy Road’s music looks back just as much as it looks ahead. With velvety vocals and dreamy guitars, Kennedy Road conjures dusk and memory, grit and grace. This is music from the heart, for the heart.
Share
View on Google Maps