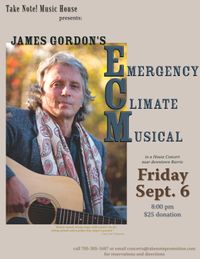 The Take Note! Music House branches into the world of musical theatre, presenting James Gordon’s “Emergency Climate Musical” on Friday, September 6 at 8:00 pm (doors open at 7:30. Requested donation is $25, with all proceeds going directly to the artist. You may reserve your seat by emailing concerts@takenotepromotion.com or calling 705-305-1687 (email best, guess who still hasn’t fixed the phone?) – address given upon reservation – downtown Barrie, near the courthouse.

Before the 2015 federal election, songwriter/activist James Gordon barnstormed his way across the country with his hugely successful one-man show “Stephen Harper: the Musical”. Feeling optimistic about that last musical’s results (It worked - you’re welcome), he’s back with his “Emergency Climate Musical’: a ninety-minute theatrical investigation of what is certainly THE issue in these uncertain times.

Written in the shadow of increasingly bleak climate studies, the musical is filled with compelling original songs, videos, images, stories, rants, laughter, tears, audience participation, and even some concrete ways to combat a crisis. James promises to entertain, inform, and leave you with homework. Follow along as he outlines his premise that we need a comprehensive political, societal and economic makeover to face the daunting challenge ahead.

And he’s more qualified than you might expect: as a newly re-elected Guelph City Councillor (he’s fond of the term “Poetician”) James is a tireless advocate for sustainable practices, has introduced a number of climate change motions, and is a member of the National Climate Leadership Caucus. Launching September 2019, the show is begging to be brought to your local theatre, club or community hall at any time but Monday nights - council meetings! True to the show’s message, he’ll be lugging around his equipment in his own electric car.

“A remarkable Canadian performer. His body of work is truly original.” – Penguin Eggs

James Gordon has had a remarkably diverse 40-year career in the Canadian entertainment business. As a solo singer-songwriter and with the ground-breaking trio Tamarack, he has released over forty albums and has toured relentlessly around the world. Gordon has written for symphony orchestras, musical theatre and dance works, film scores, and for more than ten years was heard on CBC radio as songwriter-in-residence for the ”Basic Black” and “Ontario Morning” programs. His song ”Mining For Gold” was featured in the John Sayles film “Silver City”, and was included on the classic Cowboy Junkies album “The Trinity Sessions”. Gordon’s classic “Frobisher Bay” has been recorded by more than 100 different acts world-wide, has become a standard in choirs everywhere, and is in “Rise Again”, the sequel to the legendary “Rise Up Singing” songbook. Well-known for his songs about social justice, heritage and environmental issues, he toured for two years with his hugely successful political theatre piece “Stephen Harper: The Musical”. The full-length folk-opera “Hardscrabble Road” debuted live in the fall of 2003 and proved to be one of his most ambitious works. Gordon has produced CDs for many Canadian folk artists, and his popular “Rhyme Capsules” songwriting-in-the-schools project (through which he has facilitated over 1500 songwriting workshops) has resulted in over two dozen CDs of songs by young composers. He has recently toured in Great Britain, Cambodia, Vietnam, Japan, and all across North America. He’s often touring as James Gordon & Sons with his musician sons Evan and Geordie. In spring of 2019 James released “The Heritage Hall Sessions” on Borealis Records. Full of timely material, “Heritage Hall” addresses climate change, the artistic value gap, and peak oil with sensitivity and wit. Produced by Evan Gordon, the album was tracked live off the floor in the eponymous hall with a stellar cast of players: Jeff Bird (Cowboy Junkies, Townes Van Zandt), Katherine Wheatley, Anne Lindsay (Jim Cuddy Band), Tannis Slimmon, and Ian Bell. In 2009 BerLen Music published “The Pipe Street Songbook”, an anthology of his 50 most loved songs. Between tours, James is a record producer, playwright, community activist, Guelph City Councillor, and theatre director.
Share
View on Google Maps