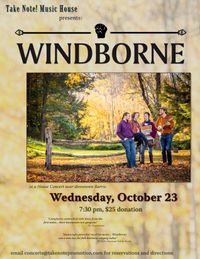 The Take Note! Music House welcomes New England vocal ensemble Windborne on Wednesday, October 23 at 7:30 pm (doors open at 7:00). Requested donation is $25, with all proceeds going directly to the artists. You may reserve your seat by emailing concerts@takenotepromotion.com or calling 705-305-1687 (email best, guess who still hasn’t fixed the phone?). The address is given upon reservation – downtown Barrie, near the courthouse.

“Sublime listening… its simple beauty is the outward expression of high artistry and meticulous care.” [The Reformer]

Stunningly powerful vocal harmony floods the room as the four Windborne singers present “Song on the Times”, their project of working class movements for peoples’ rights from the past 400 years, sung for today struggles. The group was catapulted to new heights when clip of them singing in protest outside Trump tower went viral, and their Indiegogo for the project raised 1,600% of its goal from 2,600 people in every State and 22 countries. Aside from this new project, Windborne has collected and studied polyphonic vocal music for over 15 years from traditional singing masters from cultures around the world. Windborne is able to shift from radically different genres like no band you have ever heard, as comfortable with an improvised Corsican couplet song, as an English ballad. Lynn Mahoney Rowan, Will Thomas Rowan, Lauren Breunig, and Jeremy Carter-Gordon share a vibrant energy onstage – their connection to each other and to the music clearly evident. They educate as they entertain, telling stories about the music and explaining the characteristics and stylistic elements of the traditions in which they sing.

The four Windborne singers grew up immersed in the traditional song and dance communities of New England and discovered a love of world folk music in their teens. Over the past decade, Windborne has sought out masters of traditional singing styles in the US and around the world to study a variety of vocal music. Through these collaborations, they have developed the vocal agility and authentic sound for which they are known. Their dynamic concert programs include songs from Corsica, the Republic of Georgia, Bulgaria, Quebec, and Basque country, as well as traditional and original American folk music. They believe deeply in the power of music to change hearts.

In addition to performing in New England and around the world, Windborne has taught workshops in schools, community centres, singing camps, and universities. Seasoned teachers and song-leaders, they delight groups young and old with enthusiastic, clear, and nuanced instruction for musicians of all levels of experience. Singers not only learn the notes of a song, but also work on the varied vocal styles, language pronunciation, and gain an understanding of the song in its original cultural context.

In 2014, Windborne was one of 10 groups selected by American Music Abroad and the US Department of State to tour as cultural ambassadors through music. They traveled to Turkmenistan, Kyrgyzstan, and Angola, touring with internationally known artists, performing at sold-out national theatres, and collaborating with traditional musicians in each country. They also taught music and dance workshops to schoolchildren, English-language learners, dance schools, choirs, and music conservatories.

“The singers of Windborne have a deep understanding, both musically and culturally, of the traditions from which they draw much of their repertoire. Their singing is a feast of a cappella harmony.” [Peter Amidon]